A Reader Asks About My Thoughts on Occupy Wall Street! 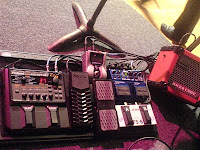 Notes:
I got an email from Phil Jacoby, luthier extraordinaire and owner of the Philtone Guitar Company, asking

"I'd love to hear your thoughts on the Occupy movement"

Before I go into my response, I want to say that Philtone Guitars is my go-to place for all things guitar.  Phil built the MojoCaster from and ill-advised assorment of parts and turned what could have been something from the last verses of “One Piece at a Time” to a guitar I played every Sunday for nearly five years.  More than a “guitar repair” guy, Phil is a certified luthier and every time I walk to him, his response is always an education (ask him to give you the “tone vs. sustain lecture” ), so now I get to turn the tables and wax philosophical to him.  Here we go:

Phil.  Thanks for looking at the blog.  Glad you like the pictures of my axes; thanks to you, they actually get played.

My age tempers my thoughts on the Occupy Wall Street movement.  I grew up during the 60’s when the anti-war, civil rights and other “movements” began and came to influence the America we have today.  If history tells us anything, we know that protests tend to expand  and co-mingle rather than die out.  If you look at the protests of the 60’s you’ll see that by the end of the 60’s the anti-war and civil rights protests had converged on some fronts.  A year to the day before his death, Martin Luther King gave a speech against the war in Viet Nam and tied the money spent on that war to the lack of employment for people of color in America.

What does that have to do with anything?  The biggest complaint I hear about the Occupy movement is they are unable to pare down “what they want” into a succinct sound bite.  What’s wrong with that?  The “Calvin Thomas litany of all things wrong with the sound bite” goes a little like this:
While the sound bite does enable “news” organizations to compress events into manageable “chunks:: for “consumer” to process, when the “news’ follow-up on that event (or series of events) does not go much below the surface of the sound bite, and the “consumers” do little to gather additional information to flesh out the “news” reported, it is impossible for the public to make an informed decision about that event.

The common response to this argument is, “Who has time to do all that research?”  It is upon that very argument that “news” organizations base their utility to the public.  Allegedly, they sift through all the data to bring us the salient facts about the issue.  Such a premise assumes the “news” organizations have no hidden agendas, aren’t owned by any corporations or organizations with ulterior motives, and actually have the resources to be independent and comprehensive.  Unless you’ve been living under a rock for the past 30 or so years, you know none of that is true.

Okay, okay, all of that is for another soapbox.  To the “I’m too busy to hunt down the facts” crowd I’ll quote Thomas Jefferson, author of the Declaration of Independence, of the statue of Virginia for religious freedom and father of the University of Virginia: “An informed citizenry is the only true responsibility of the public will.”   BOOYAH (Okay, TJ probably didn’t say that last part)

Now, back to the Occupy movement.  That 1% of the population controls the majority of the wealth has overwhelming implications.  First, I think about how if that is true, why do we have the poverty we have.  The next thing that comes to mind is since access and influence over the media would certainly have to resources, how is that 1% influencing what I see and hear about the Occupy movement?  Finally, I have to question my role in this inequity.  If I profess to believe in the teachings of Jesus Christ, what is my responsibility in addressing, reversing and resisting this inequity?  It is easy to say, “Hey, I’m definitely not part of the 1%,” but I’ve been blessed to have a good job and a comfortable life.  Is there more I can be doing to help others, and how do I do get started?

Add to that Pope John Paul II spoke to this inequity long before the Occupy Wall Street movement.  was Well-known for his criticisms of Marxism, John Paul II did not mince words about  capitalism in his 1987 encyclical Sollicitudo Rei Socialis 37, noting the , “…all-consuming desire for profit and the thirst for power at any price with the intention of imposing one's will upon others, which are opposed to the will of God and the good of neighbor.”  There you have it, plain as day, where the then Pope equated rampant capitalism as being against the will of God.

Therefore, I think the Occupy movement has its work cut out for it.  I think the inequality in the distribution of resources is not just an American problem, it is a world problem and as the rich get richer, the entire world moves closer to a showdown over wealth, resources and responsibility.  What responsibility (if any) does the 1% owe to the 99% consuming the goods and services that ultimately contribute to their majority share of the world’s resources?

Oh yeah, back to the 60’s.  Earlier I said protest movements tend to expand rather than contract.  It is interesting that the uprisings in Tunisia, Egypt, Yemen, Libya and now Syria are referred to as “Arab Spring.”  Many let this term roll off their lips without knowing what the term means.  It is actually a play on the phrase “Prague Spring,” which refers to the 1968 events in Czechoslovakia when Alexander Dubcek, a reformer, attempted to implement democratization.  Russia crushed the movement with a Warsaw Pact invasion.  Of course, no one talks about this when discussing Arab Spring, but a massive brutal crackdown is still a possibility in Syria.  In Egypt, when the Tahrir Square euphoria subsides, what happens when the results of the changes so far fail to satisfy the core complaints of the protesters (lack of jobs, horrible economy, and wealth in the hands of a few (hmm…sound familiar?)) that brought down the government?

Phil, I hope this answers your question.  I am sorry to have rambled on so much.  In addition, thanks for helping me write my blog for today.
Peace
Cal