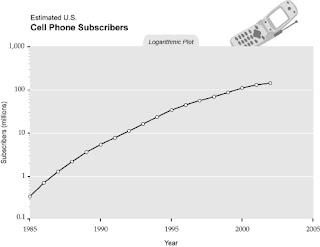 From December 1995 and December 2009, the number of cellular subscribers increased by 118% and the percentage of the U.S. population with wireless access increased from 13% to 91% (CTIA-The Wireless Association, 2009).  Manufacturers initially marketed cell phones to an upscale niche, primarily business users and people of means.  On the business side, cell phones were a tool to keep increase connectivity as well as the pace of business, resulting in more business.  For the upscale market, having a cell phone was a status symbol, indicating you were important enough to need the instant communication of a cell phone.

These early adopters of cell phones financed technological advances making them cheaper to own and operate.  As prices dropped, the utility of the cell phone migrated from the business/luxury class to penetration of nearly every socioeconomic class in America.  While business use is still a staple of the cell phone’s target market, current marketing aims at families, touting the advantages of using cell phones to stay connected.  The same technology that enables business people to connect with customers and expand the bottom line can also coordinate the schedules of working parents to attend to the demands of home, work, school and extracurricular activities.

As dramatic as the rise in cellular penetration and the expansion of non-business use is the age of the typical cell phone user.  Because a subscriber has to be at least 18 years old to enter into a cellular service contract, very little data on users below that age is available.  The marketing of cell phones, particularly of the features most attractive to users under the age of 18 (such as texting), shows a shift in demographic focus by cell phone manufacturers.  According to 2008 Nielsen statistics, out of all cell phone users polled, 35% of users between the ages of 13-17 were able to recall text-messaging advertising.  The next closest age group was 18-24 (18%) (Nielsen Telecom Practice Group, 2008). So not only is cell phone use moving from business to home users, a growing demographic of the users are younger.  (Cell Subscriber Chart: (Kurzweil, 2005))


Much like cellular technology, newspapers represent a medium evolving before our eyes.  Once the primary source of news and information, newspapers struggle to adapt ahead of technologies that not only duplicate some of the key functions of newspapers, but do it faster and to a wider audience.

Even discounting the advent of the 24-hour television news channel, internet news, topic-specific and general-knowledge websites are all challengers to the newspaper’s function as a provider of world and local news.   Blogs, applications such as Twitter, email, and social networking sites rival newspapers as sources and distribution networks for opinion, entertainment and entertainment news.  As newsprint real estate shrinks, syndicated cartoonists migrate their work to the Web, allowing readers a choice of comics.  The monetization of websites and blogs through content-specific ads threatens the newspaper’s financial underpinning, advertising.  As a result, already shrinking subscriptions must shoulder more of the fiscal weight to keep newspapers afloat (Pew Research Center's Project for Excellence in Journalism, 2007).

Newspapers are designed for rapid consumption, on the train, on the bus, at the desk, etc., then discarded.  Internet-enabled smartphones deliver the latest news, along with pictures, sound and video clips in the palm of your hand.  In addition to summarizing breaking news, users can use embedded links and search engines to go in depth on any story, or surf to the next item of interest.  Newspaper staff reporters cover the local beat while staff writers focus on in-depth pieces of local and sometimes national significance.  Local television websites provide the headlines along with video and updates, while dedicated web sites and blogs (often authored by former reporters) give readers continually evolving analysis of issues.

Still, newspapers survive, trying to evolve amid a landscape that seems to be just a step ahead.  Many papers experiment with a web presence, and while that may stave the inevitable, the extinction of the newspaper as we know it is unavoidable.  A more accurate statement is that the newspaper as I know it, is unavoidable. As the newspaper has evolved, through good times and bad, each generation has come to know and accept that iteration of the newspaper as the baseline.  To future consumers of whatever the newspaper will become, the changes I consider drastic (fewer pages, more ads, less substance, etc.), will become the norm until what’s left migrates to whatever the internet has become.  Just as very few young people bemoan the demise of the phone book, so will newsprint fade into technology’s horizon. 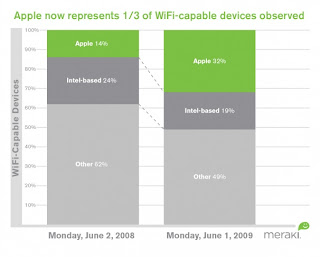 Wi-Fi wireless local area network (WLAN) technology, while not a media technology, per se, enabled the internet to migration from wired local area network (LAN) desktop and laptop computing to wireless computing by web-enabled smartphones and other devices.  Originally designed to simplify business computer networks  by eliminating the need for hardwire network connections, Wi-Fi use quickly evolved  to create WLAN networks in homes, and now to help businesses attract customers by offering on-premises Wi-Fi connections to the internet.   In 2009, AT&T reported 26million Wi-Fi connections in the first half of 2009, compared to 20 million connections for all of 2008 (Fleishman, 2009).  Originally used for tool for laptops and desktops, internet—enabled smartphones represent a growing segment of Wi-Fi users, with Apple devices representing one-third of all Wi-Fi-capable devices observed (Malik, 2009).  Wi-Fi user demographics show a segment using Wi-Fi as an extended home office or college library (Watershed Publishing, 2009).

Besides laptops, notebooks and smartphones, portable music players and videogame devices use WLAN’s to access the internet.  Study results found that in addition extending their classroom or office for work or email, Wi-Fi users utilized a full spectrum of activities while connected via WLAN’s, from accessing social networks to researching and buying goods and services (Watershed Publishing, 2009).   While some businesses, such as hotels and resorts monetize WLAN access either through pay-per-use or subscription (HotSpotzz Network, 2003), other businesses, such as cafés and coffee shops, provide Wi-Fi access free of charge to attract customers.  As an added marketing feature, businesses can configure their WLAN’s to interact with smartphone GPS to guide customers to their store, as well as provided select content (electronic coupons, web-only specials) related to the business.


Cable and satellite television, especially when combined with digital video recorders (DVR), changed how we consume television programming.  Cable television originally did not stray far from the network model of broadcasting and while it did provide “premium” programming (movies, sporting events and themed channels), cable television still adhered to a schedule and even with the advent of VCR’s, controlled how consumers watched shows.  As cable television penetrated U.S. households, viewers of the network programming declined across all three networks ( Nielsen Media Research, 2006).  Cable programming,

rather than compete with network shows, was free to focus on specialized “channels” and produce content dictated by the theme of the channel.  As the “Big 3” depended on a variety of programming to attract audiences, each cable channel developed a unique identity (MTV, CNN, ESPN, TLC, Discovery, etc.), and concentrated on programming to support that identity.

Instead of augmenting “Big 3” network programming, cable television let more players provide programming and become a “network,” without having to invest in broadcast infrastructure.  Bypassing the need for over-the air-broadcast infrastructure let newer players roll that capital into highly specialized programming.   Competing for smaller and more diverse audiences replaces previous concerns about appealing to the broadest audience.  Cable and satellite television content providers, targeting smaller, discrete audiences, let advertisers pursue niche audiences with most of the demographic work already done.  DVR technology frees the audience from the strict schedule of the network model, to choose when they watch their favorite shows.  DVR’s, in addition to aiding in scheduling, organizing and storage of recordings, can also use search engine logic to find similar programming and make recommendations for additional recording.